Do you have a tattoo but now wish you had not got it done before? Does the tattoo look irrelevant to your current personality? If yes then do not bother as a solution lies in the form of the tattoo removal. If your tattoo has faded away or caused you skin problems then this is the solution that you can embark upon.

Prior to option for a tattoo removal, you must always regard your skin expert to know the various possibilities for the same. There have been cases where people try to remove the tattoo all by themselves but their efforts go in vain. Their methods comprise of using tattoo removal creams, which often fail to get off the entire tattoo, while other methods consist of incisions and burning. These methods not only fail to remove the tattoo effectively but also causes scars, pain or irritation on the skin, further aggravating the skin problems.

One must also consider various components such as the colors used in the tattoo, their thickness and size while removing the tattoo. The only effective way to remove a tattoo is by consulting an expert skin doctor who will guide the individual in the best and safest possible way rather than experimenting on oneself and be causing harm.

Fractional Q switched ND-Yag Laser is used in this treatment which is safe, secure and also leads to positive results. This treatment has been particularly developed for the tattoo removal procedure, leaving behind no scars or any un-pigmented parts of the skin. This procedure is initiated by using the laser high energy penetrates through the skin and breaks up the tattoo ink into small particles which are absorbed by the skin. As one may feel a bit of soreness or uneasiness, a local anesthetic is used to reduce the pain. At ClearSkin we recommend tattoo removal by Fractional Q switched ND-Yag Laser to get best possible results.

Do you have a tattoo but now wish you had not got it done before? Does the tattoo look irrelevant to your current personality? If yes then do not bother as a solution lies in the form of the tattoo removal. If your tattoo has faded away or caused you skin problems then this is the solution that you can embark upon. Common Tattoo Removal Techniques Are: • Laser Surgery • Dermabrasion • Surgical Removal Prior to option ... Read More

Treatment Modality      Before & After Images 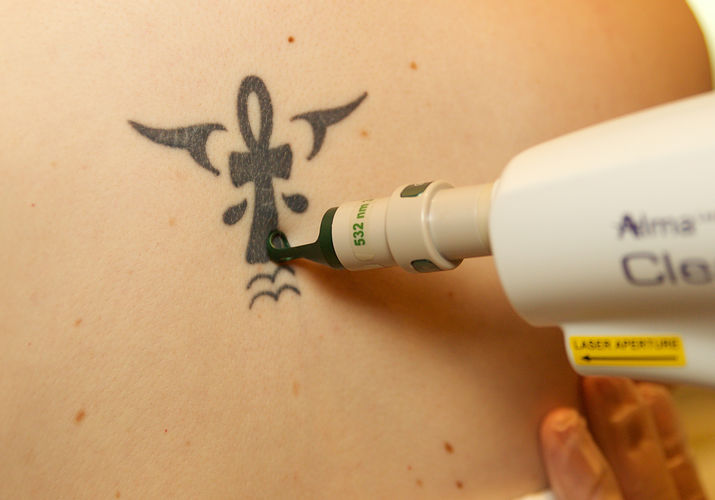 Fractional Q-Switch laser The tattoo is usually made up of different colours & they are located in the deep dermis ...... Read More

The tattoo is usually made up of different colours & they are located in the deep dermis of the skin. Different wavelengths are required to target different colours in the tattoo to fade it gradually. Fractional Q switched Nd Yag laser is the ideal method of removing permanent tattoo ’s on skin surface without damaging skin.

What is the mechanism of Laser tattoo removal?

Laser tattoo removal works on the principle of  “Selective –Photo-thermolysis “.  Means, selective wavelength & laser energy is delivered into the deep dermis to cause a thermal breakdown.

In this process, the laser energy is absorbed by the tattoo ink particles in very short time, in nanoseconds. Due to this, the surface temperature of the ink particles rise to thousands of degree ’s but this energy profile rapidly collapses into a shock wave. This shock wave then propagates throughout the local tissue [ the dermis ] causing brittle structures to fragment. Dues to this tissues are largely unaffected since they simply vibrate as shockwave passes.

• Immediately after Laser Tattoo removal, the area gets slightly elevated, white discoloration [froasting], with or without punctuate bleeding is observed. it takes around 3 to 4 days to heal the area.

• One should go for the gold standard, FDA approved Fractional Q switched Nd YAG laser to avoid side effects after laser tattoo removal.

• Few patients may get, hyperpigmentation or hypopigmentation on the treated area which fades away gradually. Scarring may occur when removal is done by cheaper lasers, which are not standardized.

• Pain during laser tattoo removal is described to be similar to that of “ hot oil on a skin or a “snap “ from an elastic band.

• The pain involved during the laser Tattoo removal depends upon individual patients pain threshold. The sensitive patient may feel tattoo removal bit painful mainly on the bony areas having less cushion provided by muscles. This pain can be reduced by application of topical anesthesia before 40 to50min of treatment.

The pain of the session can be reduced by using cool air or ice packs.

• This is because at each session, some but not all of the tattoo pigment particles are effectively fragmented & the body removes the smallest fragments over the course of several weeks.

• Treating more frequently than seven weeks can increase the chances of scarring.

• After tattoo removal session, there is redness, localized swelling, punctate bleeding in the treated area.This needs a good care with a topical antibiotic to avoid chances of getting any secondary infection.