Condition in which the oil-producing glands become clogged and infected, leading to the formation of pimples, especially on the face. It is commonest during adolescence and can occur even during adulthood. This is often caused by the action of hormones on the oil glands. The glands become overactive and pimples develop, often accompanied by inflammation. If an oil gland is blocked by sebum(oily secretion) below skin then it appears as a white head. If the external opening of the duct is on the skin, it will appear as a blackhead.

The oil, or sebum, produced by the sebaceous glands is not harmful to the skin. It is the overproduction of this oil or sebum that fuels acne. The excess oil combines with dirt, debris, dead skin cells, and even pollutants that are present in the air. This mixture then clogs pores, which creates a breeding ground for bacteria. This is what causes acne outbreaks.

The most common type of acne. Characterized by:

Whiteheads – occur when a pore gets completely blocked. Oil, dead skin cells, and bacteria get trapped inside. This causes a white acne pimple on the surface.

Blackheads – occur when a pore is only partially blocked. Oil, bacteria, and dead skin cells still get trapped, but some seep to the surface, reacting with oxygen and turning blackish in color. Contrary to popular belief, the color has nothing to do with dirt being trapped inside.

The most common type of acne. Characterized by:

Papules – Tiny, sensitive, tender, and inflamed bumps on the skin. Can cause scarring if you attempt to pop or pick these.

Pustules – Similar to a whitehead, pustules are pus-laden and inflamed. Looks like a red circle with a white or yellow dot in the middle.

Scarring is more common and severe with this acne type. Severe acne is characterized by:

Nodules – This severe type of acne consists of large, hard boils deep under the skin. These boils are much larger than the lesions you typically see in mild forms of acne and can be painful.

Cysts – Known as cystic acne, looks like a nodule. The cysts are filled with pus. Cystic acne is known for causing scarring.

Acne whose onset is mainly caused by hormones goes by the specific name of hormonal acne. Hormonal acne may not respond to traditional acne medications and treatments. Topical retinoids and systemic or topical antibiotics may not have any effect or limited effect on the acne.

There are several signs that can be used to tell if acne is hormonal acne:

• Getting acne mainly as an adult. If a person did not have acne or very little acne as a teen and then gets a huge acne breakout later in adulthood.

• Acne breakouts or flare-ups before the menstrual cycle.

• Worsening of the acne during pregnancy or menstruation.

• Increase in oil on the face

• Acne flares up again after it was cured over 6 months before.

• Darkening of the skin around the armpits and body fold.

• An increased level of androgens in the blood.

DO’S AND DONT’S FOR ACNE:

• Be aware of the side effects the medications you are taking may have.

• Gently wash your face 2-3 times a day with a mild cleanser.

• Use only water-based moisturizers to keep the skin soft, smooth and hydrated.

• Keep hair off your face.

• Change your pillowcases and towels frequently.

• Use sunscreen. Use a full spectrum UVA/UVB. This prevents hyperpigmentation and preserves skin elasticity.

• Keep your fingers and hands away from your face – they are carrying bacteria.

• Stay patient! You are not going to get rid of acne overnight.

• Don’t smoke. There are many reasons to stop smoking, and here is another one to add to the list.

• Don’t use toothpaste as an acne treatment.

• Don’t go for a facial more often than every 6 weeks.

• Don’t take drugs that were not prescribed for you by your doctor – especially steroids.

• Don’t scratch or rub an acne infected area – no matter how much it itches.

Condition in which the oil-producing glands become clogged and infected, leading to the formation of pimples, especially on the face. It is commonest during adolescence and can occur even during adulthood. This is often caused by the action of hormones on the oil glands. The glands become overactive and pimples develop, often accompanied by inflammation. If an oil gland is blocked by sebum(oily secretion) below skin then it appears as a ... Read More

Treatment Modality      Before & After Images 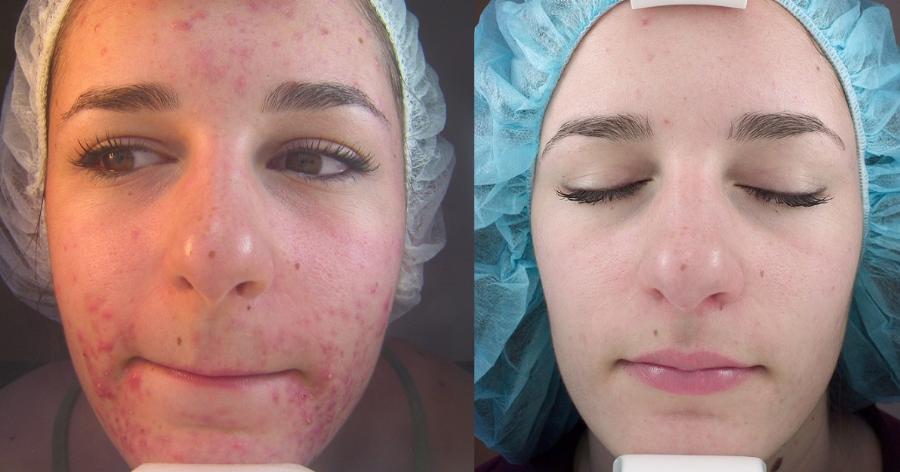 All about Chemical peels

Chemical peels are the epidermis called stratum corneum& allow the destruction of the epidermis. These include AHA peels such as glycolic peels [35 % to 50 %], lactic acid peels  40 % etc.

Downtime:- These peels doesn’t involve much downtime. Also called as lunch hour peel means one can join their office or work immediately after the session

Causes the destruction of the Epidermis, papillary dermis & reticular dermis. These include TCA [35 to 50 % ]Jesseners solution with TCA, Glycolic acid 70 % etc.

Downtime:- After medium depth peels, redness, itching & flakiness, dryness on the skin may persist for 3 to 4 days, which can be concealed easily with foundation or moisturizers.

Are usually acting on the deep layer of the dermis, which has collagen & elastin fibers, which are responsible for tightness & firmness on the skin. These are responsible for the destruction of epidermis, Papillary dermis up to mid-reticular dermis. These include phenol peels.

Downtime:- These peels involves more healing time as they act into deep dermis. Downtime will be for 8 to 10 days. Strict photoprotection is advisable to avoid getting PIH.

• To reduce fine lines, wrinkles on the skin.

Nowadays, one solution of chemical peel has also come with 2 to 3 ingredients in it, to give better results when used in combination.

Before going for chemical peels session one should not  have :

• The skin should not have any active wound, which will need some time to heal.

• The patient should not have any history of photosensitivity.

There should not be any recent episode of tanning or heavy sun exposure.

• Whether he or she is on regular use of broad-spectrum sunscreen, should be asked.

• Previous &recent treatment History in terms of oral & topical medications should be taken in detail to avoid any complications after chemical peels session.

For eg:- Many of the patients use different OTC products without the guidance of a dermatologist, these may contain certain steroids. Long-term application of which may lead to redness, telangiectasia on the skin.Such patient cannot tolerate chemical peel session as their skin becomes sensitive & irritable with steroid applications. 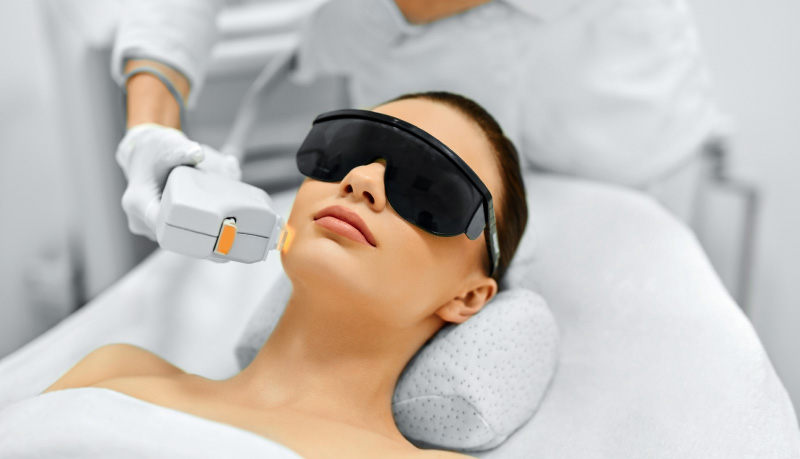 IPL therapy is considered a non-ablative resurfacing technique, which means that it targets the lower layers of skin (dermis) without affecting the top layers of skin (epidermis).

How does it work?

Light pulses targeted at the red-pigment (hemoglobin) in the blood which heats and destroys the pigment without affecting the skin or other tissues.

IPL acts by photodynamic therapy (PDT) in the treatment of acne vulgaris.Propionibacterium acnes (P. acnes) produces the porphyrins during their growth and proliferation in the follicular units.These porphyrins absorb the red [415nm ] & blue light [ 630nm ] of the IPL & helps to destroy P Acne bacteria.

Light pulses targeted at the melanin in the skin’s surface which heats and destroys melanin to remove the discoloration.

Ipl works very good in skin rejuvenation, also called as photo facial in which 530 nm wavelength is used.It helps to stimulate collagen fibers beneath the skin, helps to build elastin fibers in the skin, which helps to give a more youthful appearance to the skin

Light pulses targeted at the hair follicle causing the hair to fall out and prevent further growth.

In the treatment of Rosacea, it helps to target oxyhemoglobin of blood vessels, capillaries in the skin, which helps to reduce redness, vascularity of skin.Multiple sessions are needed to achieve best possible results.

The advantage of IPL therapy:

• Minimal downtime – a patient can often have the procedure done on their lunch break and return to work immediately afterward.

What things to avoid before the procedure:-

• Avoid sun exposure in the days and weeks before and after treatment.

• The smooth, glass surface of the IPL treatment head is applied to the skin, delivering precise pulses of light to the area being treated.

• Treatment sessions usually last about 20 minutes. A course of 4-6 sessions every 3-6 weeks may be needed to achieve desired results.

• Most patients can return to work immediately after treatment

Use of broad-spectrum sunscreen is advised to avoid PIH 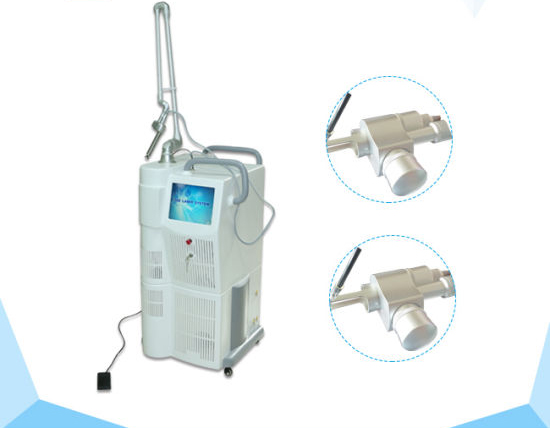 What is the Low-Level Laser Light therapy (LLLT)  This treatment is referred to as ‘low-level’ because ...... Read More

What is the Low-Level Laser Light therapy (LLLT)

This treatment is referred to as ‘low-level’ because the energy or power densities delivered are low compared to other forms of laser therapy such as ablation, cutting,

• Hormones in the sebaceous gland, but the unwanted effect of exposure to UVA and UVB limits sunlight for the treatment of acne.

Penetrate deeper in tissues as compared to blue light. Red light can affect the sebum secretion of sebaceous glands and change keratinocyte behavior. Red light acts on the cytokines in cells & thus helps in reducing inflammation.

• Painless treatment without any downtime.

• Can be combined with other procedures like chemical peels, laser treatments to get best possible results.

• Helpful in patients who don’t tolerate or take isotretinoin.

• Can be given immediately after ablative laser resurfacing to allow faster healing of the skin.